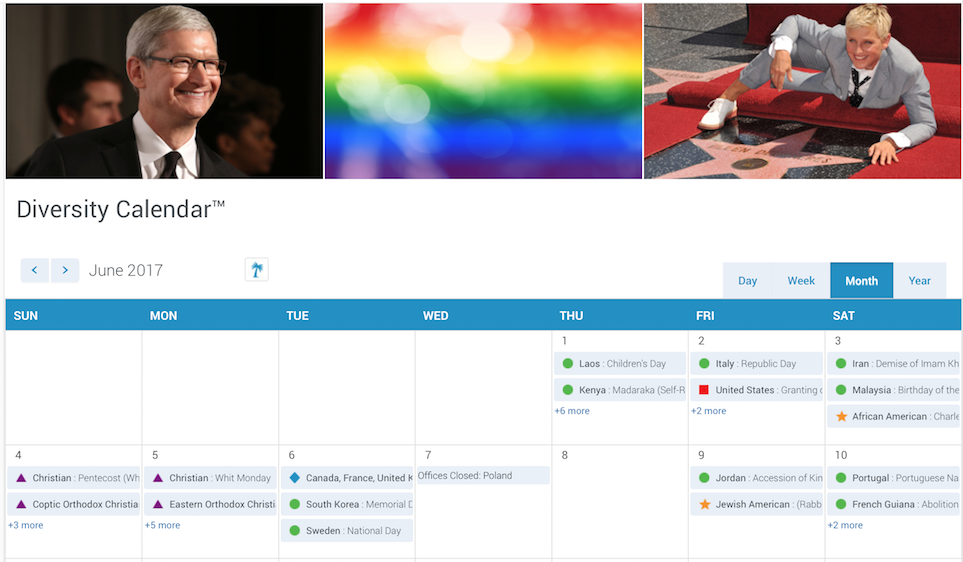 June is perhaps best known as the advent of summer. But our June 2017 diversity calendar also provides many opportunities to celebrate a colorful rainbow of diversity in your workplace.

Below is a partial list of June 2017 diversity events. For a complete list, please see our interactive online calendar.

Another key LGBT event is:

June 28 – the anniversary of Stonewall Rebellion. On this day in 1969, the LGBT community fought back against police harassment. It’s seen as the first organized LGBT effort in the United States to openly gain equality under the law.

June is an ideal time for LGBT sensitivity training, such as our most popular LGBT video, Anyone Can Be an Ally.

Christianity
June 4 – Pentecost – Also known as Whit Sunday, the Pentecost commemorates the descent of the Holy Spirit upon the apostles, and thus the birth of the Christian Church.

Other holidays include Trinity All Saints Day, the Feast of Corpus Christy, and the Feast of Sacred Heart. Please check our online diversity calendar for 2017 dates.

Islam
24 – Eid al-Fitr . Beginning at sighting of crescent moon, Eid al Fitr signals the end of Ramadan, a month of fasting and other observances.

June 19- Juneteenth commemorates the emancipation of all slaves in Texas. It’s a time for celebrations in Black American communities, including rallies, speeches, art and music, and more.

Judaism is the #2 most-practiced religion in the United States, so every month it’s essential to recognize your Jewish employees, customers and more. A great way to celebrate is with the birthdays of notable jews. One such date is:

June 12 – Anne Frank birthday – Born in Germany, Frank is because one of the best-known Jewish victims of the Holocaust. She gained fame after death, with the publication of The Diary of a Young Girl, in which she journals about her life in hiding during the German occupation of the Netherlands in World War II.

Nearly 1 in 5 Americans – or 19%  – has a disability, whether physical, mental or other. Create greater inclusion by celebrating the accomplishments of the disabled, such as:

June 27 – Helen Keller, birthday – Keller was an American author, lecturer, and political activist. As the first deaf and blind person to earn a college degree, Keller is widely inspiring to the disabled community.

July is just around the corner. Discover 7 key events for next month with our July 2017 Diversity Calendar.